For a number of years I have been selling antique swords to customers throughout  the world and have earned a reputation for fairness and reliability. I am always happy to correspond with customers and talk about this fascinating area of history and collecting. I am also a great believer in freedom of speech on the internet but please be aware that this freedom should not extend to anonymous individuals committing libel and spreading outrageous falsehoods about a person's character and reputation. Unfortunately, I have been a persistent victim of this anonymous and cowardly practice (as have other sword collectors, dealers and auction houses that have innocently crossed this individual's path) and I ask anyone reading blogs that spread this malicious material to simply make up your own mind as regards the kind of mentality that would spend hours writing anonymously (he never displays his real name) about individuals they have never met and who have no right to reply.

Anything I write on the net I do so with my name prominently displayed - I have nothing to hide and am proud of what I do and my achievements.  It is interesting to note that if I was such an awful character as depicted in these dreadful blogs and I had done all the things attributed to me by this one individual, then how is it that I have managed to stay in business selling antique swords to thousands of satisfied customers since 1999?  Surely, my misdemeanours would have caught up with me by now and I would be pursuing a different occupation?

If you want to find out more about my longstanding and genuine commitment to customer care and honesty, please go onto e-Bay (user id: anglianmilitaria) and read my many thousands of positive feedbacks that date back to 1999.

Luckily, I am blessed to have a wonderful wife and family who have supported me during this difficult time and I thank them for making me realise that those who actually know me whether through personal friendship or business dealings, would never believe anything written by this individual.  I sometimes wonder if he is referring to another Harvey Withers as this person and all his awful character traits is definitely not known to me!

Role of the Internet and Blogging

Let me finish by saying that the internet is supposed to be a forum for debate, information and improving our understanding of the world.  In that role it does a marvellous job and long may it continue.  Blogging is a major outlet for those who wish to express their views on a myriad of issues and concerns and in many countries, it is the only democratic means to highlight serious miscarriages of justice and human rights concerns.

Saying that,  I do not believe that web hosts who allow anonymous blogging that defames innocent people and destroys reputations, adds anything to the internet or the goodness and progress of the world in general.

Thank you for reading this.

Be aware that trolls really do exist and they are in resident in our sword collecting community!  There are individuals out there who gain enormous pleasure from writing completely false and libellous comments in blogs and forums about those who both collect and sell antique swords.  They are called internet trolls and usually suffer from various forms of mental illness and deep self-loathing.

Feel sorry for them and their multiple personality problems but don't believe what they write!  If you read anything in a blog that attacks an individual, look at the kind of language used - invariably it takes on a ranting tone and includes lots of personal attacks and lies - interestingly, it usually concerns the personal appearance of the victim which probably indicates an physical inferiority complex by the internet troll himself (or herself of course!).  Normally their blog not only attacks an individual, but a whole group of people, organisations or companies, who they have decided (in their own twisted view of the world) should be relentlessly attacked from the comfort (and safety) of their computer many hundreds, if not thousands of miles away.  How cowardly is that?  If you read garbage from any individual on the internet purporting to be an expert on antique swords and using multiple blogs and bogus forums (peopled by himself using aliases) to attack both me and other persons, I suggest you take whatever is said with a very large pinch of salt and just carefully read the rantings and make your own mind up!

I have been told that the troll below is pretty representative of what these subterranean folk look like.  Do you know anyone who looks like this...? 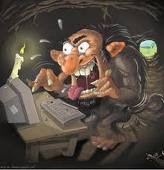