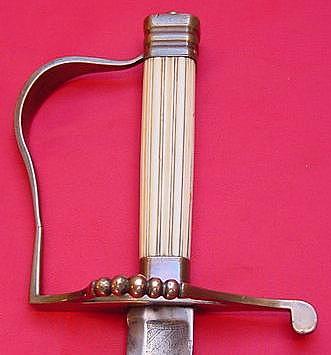 The 1786 Pattern Infantry Officer’s Sword was adopted soon after the official abolition of the Officer’s Spontoon, or half pike, which had become little more than a symbol of authority in the field of battle, rather than an effective combat weapon.

King George III approved the introduction of a straight bladed, single fullered sword, and early 1786 Pattern spadroon-type versions are to be found with a straight, beaded knucklebow, reeded ivory grip and cushion, vase or urn-shaped pommels.  This was soon replaced by a double shell guard. 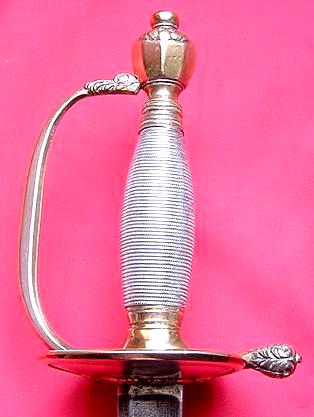 Early examples of the 1786 Pattern have a rigid double shell guard that was superceded in 1796 for one that had a folding guard.  This adaptation enabled the officer to avoid fraying his uniform.  An NCO pattern is also found with plain brass hilt, blade and scabbard mounts.  Hilt and scabbard mounts were plain brass.  It is much rarer than the officer‘s sword as they were normally discarded when unserviceable.

The 1796 Pattern was the mainstay of the British Infantry Officer for over 25 years.  Its obvious defects and fighting inadequacy were no doubt the cause of many unnecessary deaths amongst British officers.  Protection to the hand was minimal, and the blade was rather thin and flimsy.

This example shown on the left has the typical hinged folding guard, urn-shaped pommel and blue and gilt decorated blade.  Unusually, the original officer’s bullion sword knot still remains.  Because of their obvious fragility, very few survive and especially in this condition. 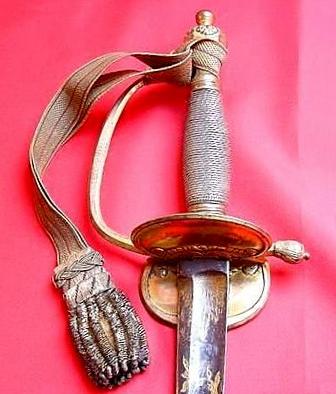 Grip covering tends to be either silver twistwire, sheet silver (applied to give the appearance of twistwire) or copper wire.  Some blades were not decorated but left  plain but most feature blue and gilt decoration, including the royal coat of arms, “GR” (George III) cypher and stylised foliage, stands of arms, trophies etc.  Rarely do you find an officer’s name etched to the blade.

Scabbards are normally found with leather and gilt brass mounts although occasionally, steel versions are encountered that would have been used in the field.  The leather and gilt brass scabbards were prone to damage whilst campaigning (and consequent poor storage over the years) and it is rare to find both sword and scabbard in fine condition.

The 1796 pattern (with folding guard) was produced in large quantities during its service life and it is one of the most common British Napoleonic officer’s swords offered for sale in British auctions and at antique arms fairs.  It is being copied in the market but the  quality is rather poor when compared with the original.

Sadly, most are in moderate to poor condition, with many having lost either their scabbard or hilt quillon and twistwire.  Blades are normally without their original blue and gilt decoration.  With this in mind, it is advisable to hang on, save your money and wait for a good example to come along.

Many examples are marked “JJ Runkel” to the blade edge.  John Justus Runkel, originally from Germany and later to become a naturalised Englishman, had an office in London and was a major importer of German blades for officers of the British Army during the Napoleonic Wars.  Other makers names noted on blades of this pattern include Birmingham sword makers, Woolley and Deakin and London makers, Brunn, Prosser and Salter.