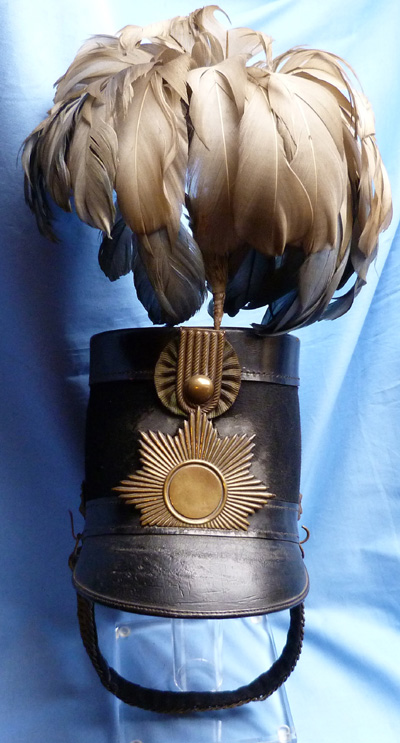 A very rare and original Boer War Afrikaner Regiment Military Shako Helmet.  This helmet was made for the Boer government or Z.A.R. (Zuid Afrikaansche Republiek) who were in existence from 1874-1902 and was also known as the Transvaal Republic.  It was an independent Boer-ruled country in Southern Africa during the second half of the 19th century.  Established in 1852, the republic was independent from 1856 to 1877 and again from the end of the First Boer War in 1881, when the Boers regained their independence from the British Empire, until 1900.  In 1900 the Z.A.R. was annexed by the United Kingdom during the Second Boer War although the official surrender of the territory only took place at the end of the war, on 31 May 1902. In 1910 it became the Transvaal Province of the Union of South Africa.  The first president of the South African Republic was Marthinus Wessel Pretorius, elected in 1857, son of Voortrekker leader Andries Pretorius, who commanded the Boers to victory at the Battle of Blood River.  The capital was established at Pretoria (founded 1855).  This shako was probably worn by a military unit although most Boer soldiers tended to wear their own civilian clothes as during the Boer Wars, they fought as a guerrilla army within the local Boer population and so did not want to be identified.  I do know that there was a Boer artillery regiment that was trained by German officers who wore a uniform and this might be from that regiment.  The condition of the shako is very good for its age with only minor age wear in places.

The inside of the helmet is stamped with a maker’s mark and indication that it was made for the Z.A.R. Comes complete with the original detachable feather plumes.  also retains the original chinscales chinstrap that hooks onto the lionshead ornaments on the side of the shako.   A great piece of Boer War history and rarely seen in the market. 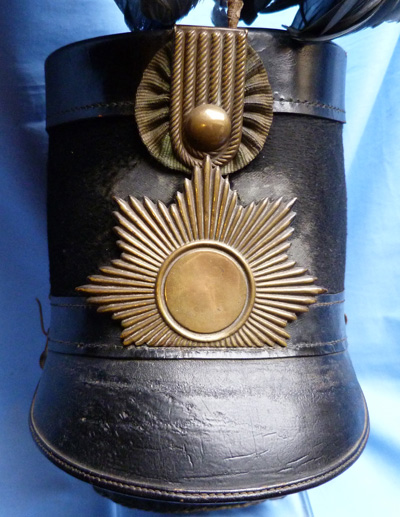