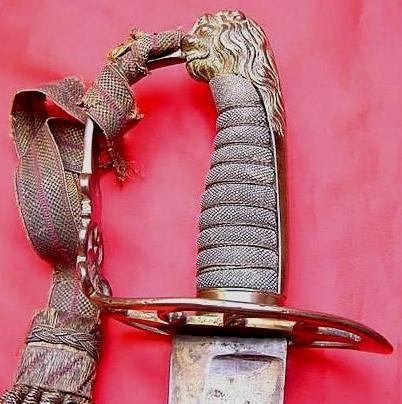 Blade: curved and flat back, single fuller and with  spear point – normally double-edged for last 7 – 8   inches.

Most examples are found without scabbards but it is worth holding on until you can locate a complete piece.  This sword looks most attractive when paired with its gilt brass and leather mounted scabbard.  In recent years copies have appeared in the market that are being made in the Far East. 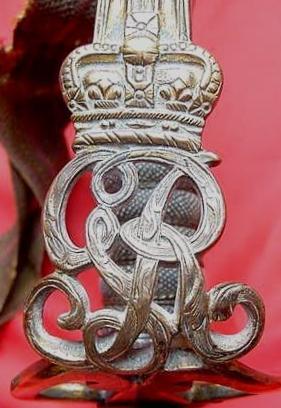 They tend to have a leather wrapped grip and poorly executed hilt and far too heavy blade.  As with all these modern imports, the sheer lack of quality to the piece must raise suspicions to the prospective buyer.  More underhand sellers will try and age the sword, particularly the blade, so beware. 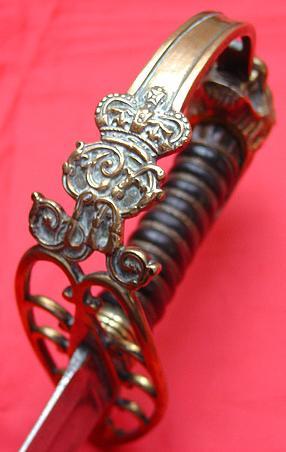 By 1800, this type of curved fighting sabre had already been unofficially adopted by many light infantry (or flank) officers, and it was only a matter of time before official recognition came in 1803.  This is one of the most attractive of British pattern swords and there are a number of subtle variations in design, most notably to the royal cypher on the knuckle-bow, the lions-head pommel and the use of either a bugle or flaming grenade above the royal crown, denoting use by both grenadiers and rifle companies.

Most  blades were also lavishly decorated with either blue and gilt  etched decoration, frost-etched or plain etched.  Some blades were simply plain, without ant decoration, indicating either a personal choice or an officer’s limited budget.  Examples with ivory grips were likely to have been carried by more senior officers.

Its curved, cavalry-type hatchet blade borrowed much from the eastern scimitar, and it quickly enjoyed a vogue amongst officers returning from the recent Egyptian campaigns.

Although seemingly unsuited to fighting on the ground (its curved blade would have been more effective when slashed from the saddle), style over substance seems to have won the day.  Lieutenant William Smith of the 77th Foot (Middlesex Regiment) carried this pattern as he “hewed and slashed his way through the enemy” before succumbing to his many wounds at the Battle of Ciudad Rodrigo (1812) in the Peninsular War.

This pattern is very popular with collectors and it is actually not an uncommon sword but most encountered are in relatively poor condition – it is rare to find one retaining its original blue and gilt finish to the blade and most are without scabbard.  Be prepared to pay a high premium for an example in original condition.  This sword is now being extensively copied but they are generally of poor manufacture – look out for artificial ageing to the hilt, blade and scabbard.