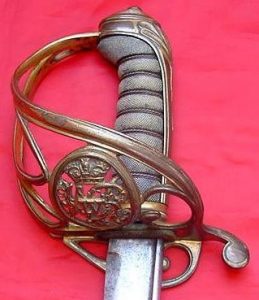 Blade: Pipe back and double-edged for the last 8-9 inches.

Grip: Fishskin, bound with either silver, copper or brass twistwire.  Some grip also bound in leather.

The 1822 Pattern Infantry Officer’s Sword was a radical departure from previous designs, with its half basket hilt becoming the standard format for British infantry swords until the end of the nineteenth century.  Distinctive features of the sword include the “Gothic” style pierced hilt, so-called after its resemblance to the shapes of windows in Gothic architecture, and the “s-shaped” folding guard.  Elegant in design, the slender pipe backed blade was sheathed in a black leather scabbard with decorated gilt brass mounts.  The royal cypher was placed within an oval hilt cartouche and during its lifetime, this pattern featured three monarchs (George IV, William IV and Victoria).  Victorian examples are pretty common with many varieties of design interpretations to the royal cypher. 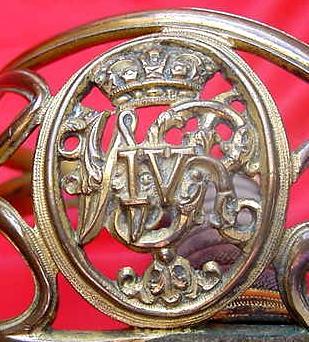 Later versions have the single fullered 1845 Pattern “Wilkinson” type blade that became the army standard.  I would recommend buying the pipe back version as it is more elegant in profile and truer to the original design.  There is a “picquet”, “levee” or dress form of this sword which is a lightweight version with a much narrower blade.  It was carried by the officer at social functions including balls, mess dinners and probably at Court. 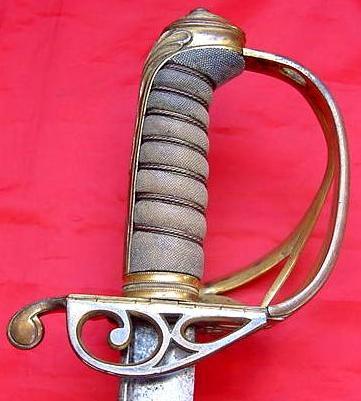 As a fighting weapon, the 1822 Pattern was rather unsatisfactory, the blade being far too weak and the hilt bars affording little protection.  When the 1845 Pattern blade was introduced, officers were not required to immediately change to the new pattern.  They were allowed to carry the old pipe back sword blade until it became unserviceable.  As with many new items of equipment introduced into a regular army, it was unlikely to have been a seamless and rapid introduction.  Some years would pass before all officers carried the new official regulation sword.  The idea that in 1845, all British infantry officers suddenly discarded the 1822 Pattern pipe back blade in favour of the 1845, would be a little fanciful and completely impracticable, and not to say, uneconomic.  The purchase of an officer’s sword was a major financial strain on many officers and they were not likely to discard an expensive sword because the authorities deemed it necessary.

Both George IV and William IV had relatively short reigns and, consequently, examples are scarce, especially in good condition.  They tend to be more delicate than later Victorian pieces and many are found with broken or missing folding guards, and damage to the hilt piercings.  It is a good idea to check carefully to see that the folding guard is working properly as they were easily damaged.  Also take care when folding guards as they were held together with very thin pins and can easily snap.

Late Georgian blades are very finely etched with much less decoration than later Victorian examples.  Consequently, the pre-Victorian swords tend to have very worn etching (sometimes to the point of obscurity).  Up until around 1835, there would also have been a black leather hilt lining.  Very few of these survive intact.