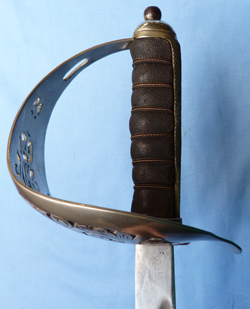 An original British Named WW1 Infantry Officer’s Sword – wounded Middle East 1918.  This is an 1897 Pattern Infantry Officer’s Sword that was owned by Captain E C Brassey of the 22nd County of London Regiment (The Queens).  The sword is actually an NCO pattern with a plain blade and is stamped with an Enfield manufactory mark to the blade forte.  Named to Brassey at blade forte.  Sword is in good condition with a very clean blade.  Complete with leather field service scabbard.  Blade length is 32 inches (39 inches overall).

“At 0045 hours Bn. left bivouac area and deployed at 0200 hours in about 142.Y.52.d (I assume this is a map reference – RV) At 0240 advance was continued for about 1000 yards towards WADI AMMAN when considerable rifle and M.G. fire was opened from right flank. It became necessary to clear this before going further, more especially as touch with the Bn. on our right had not been established, “C” Coy. was detailed to take up a position to guard our flank from an attack from the right. “B” Coy. was ordered to go back a short distance, move to the right and then deploy and advance on enemy’s position on our right flank. The rest of the Bn. was collected in a deep wadi along which the road to Amman runs. “B” Coys. advance was so far successful that they captured 2 machine guns and about 80 prisoners and established themselves in a position some 4 or 500 yards in advance of the rerst of our line.

As it was now getting light and we were not in touch with the unit on our right flank it was decided to take up the best defensive position available until the situation was cleared up. “C” Coy. accordingly occupied positions on the right of the Wadi in which the Bn. was assembled. One half of “D” Coy. was sent to command the high ground on the left of the same place, as it got light the enemy brought up fresh troops on our right flank, and the other half of “D” Coy. was sent to support “C” Coy. A further 2 Machine Guns and fifty prisoners were taken, and the situation settled down into sniping and machine Gun fire by the enemy on either side. At 0530 hours the enemy was seen to be making ground along the spur some 800 yards to our right. As this advance if continued would bring him in behind our right flank, “B” Coy. was ordered to take up osition to watch the situation here. Little or no change in our dispositions occurred throughout the day. We suffered considerable casualties from their snipers and 4.2 Howrs. Total casualties:- Killed 2 Officers – Capt. E.D. ROSE and 2/Lieut. E.J.R. BRITT and 18 ).Rs. Wounded 4 officers – Capt. E.C. BRASSEY 2/Lieut L.G.B. HILL, R.R. LAWRIE, Lieut. E.A. BOND and 60 O.Rs. Missing 4 O.Rs.”