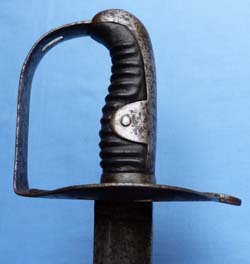 An original and rare British Waterloo period 1796 Pattern Heavy Cavalry Trooper’s Sword.  This is one of the most famous British Army pattern swords and would have been carried by heavy cavalry regiments during the battle of Waterloo in June 1815.  The sword has been made popular in recent years with the TV series, Sharpe by Bernard Cornwell, although technically speaking, what a rifle officer would want with this kind of sword, is very strange!  The sword comprises a distinctive iron, disc hilt with pierced holes. The grip is secured with riveted ears that also secures the tang.  The blade is quite substantial and maker marked to Osborn and Gunby (Birmingham) to the blade spine.  It is also inspector stamped near the blade forte.  The grip is leather on a wood and cord core.  The sword comes with its original iron scabbard that has been painted back – quite common – most found do not come with a scabbard.  Condition is typical of this pattern of sword with general age wear to the hilt and blade.  Austria seems to have been the inspiration for the famous 1796 Pattern Heavy Cavalry Trooper’s Sword.  It is an almost direct copy of an Austrian Model 1775 Curassiers Sword.  Although a rather fearsome looking weapon, in practice it did not match up to its French counterpart, and tended to inflict wounding, rather than mortal cuts.  Heavy in the hand and unwieldy, it took a strong man to use this sword effectively.  Sergeant Ewart of the Scots Greys was just such a person, and his account of desperate combat during the Battle of Waterloo, shows him carving up a number of Frenchmen with this sword.  His success was probably enabled by the fact that he stood well over 6ft 4” tall, quite unusual for men of that time.  This is a scarce sword as many were worn out over time and simply discarded.  It had a long service life which included issue to militia units and export to the colonies, particularly India.  A large number were also supplied to the Admiralty in the 1840’s, when old blades were required for cutlasses.  Most will be found without scabbard and with two types of blade – hatchet and spear point – this sword has a hatchet point.  Spear points are likely to be pre-Waterloo as a General Order was given just before the battle to re-grind the swords to a spear point in imitation of the blades carried by French curassiers.  The langets were also removed (as in this example) and the sharp inner edge of the disc guard was cut back to avoid fraying of the uniform.  Blade length is 34.5 inches (40 inches overall).

NOTE: These swords were given a long and hard service life and few have survived intact and with the anniversary of Waterloo next year, this iconic sword can only increase substantially in value so if you want a complete example then it is best to get one now before prices go mad.