A good Soviet 1930’s/1940’s Army Engineers Budenovka Military Hat.  Made from green woollen material with black woollen Soviet star and base metal Soviet badge held together with flattened split that is pushed through the cap and secured inside the liner .  The black composite buttons are maker marked to a Moscow company.  With some wear in places, otherwise in good condition.  A Budenovka is a distinctive type of military hat and a typical part of the Communist uniform of the Russian Civil War, 1920’s and 30’s and through to the early period of WW2 where it was subsequently replaced by a side cap known as the “pilotka”.  The budenovka was supposed to be worn underneath a steel helmet but this unpopular over time.

Its official name was the “broadcloth helmet” andwas named after Semyon Budyonny.  It is a soft, woollen hat that covers the ears and neck and can be worn under a helmet. The cap also has a beak and folded earflaps that can be buttoned under the chin.  The hat was created as part of a new uniform for the Russian army by Viktor Vasnetsov, and was inspired by the Kiev Rus helmet and intended to inspire Russian troops by connecting them with the legendary heroes of historical Russian folklore.  The size of the cap appears to be a medium.  There is no damage to the quilted liner. 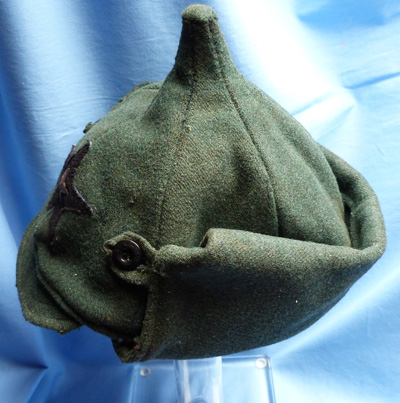