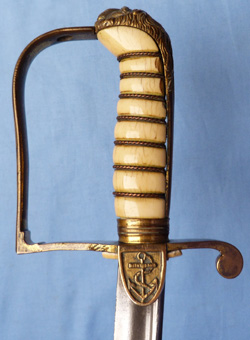 A lovely British 1805 Pattern Naval Officer’s Sword from the first quarter of the nineteenth century.  This is quite an unusual piece as it was manufactured in the 1820’s and would have been one of the last examples of this pattern before the famous 1827 Pattern Naval Officer’s Sword was introduced and became the standard sword for an officer in the British Royal Navy – a pattern that is still carried by serving Royal Navy officers.  This sword has the typical lionshead pommel of the 1805 Pattern and the detailing on this sword is particularly fine.  The grip is marine ivory and probably indicates that it was carried by a senior or commanding officer.  The original brass twistwire still remains to the grip.  The blade is of pipe back form, a blade type that was very popular in the early to mid-nineteenth century.  The blade has an etched panel that features the royal cypher of King George IV (1820-1830).  The royal cyphers from George IV and William IV (1830-1837) are sometimes difficult to differentiate but I think that it is more likely that this sword is from the reign of King George IV as the 1827 Pattern was pretty firmly established by the reign of King William IV.  The blade also has a panel near the forte that has the name, “Brady Dublin”.  They were likely to be sword retailers rather than sword cutlers.  Condition of the sword is excellent with plenty of polish remaining to the blade.  A great piece.  Blade length is 31 inches (36 inches overall). 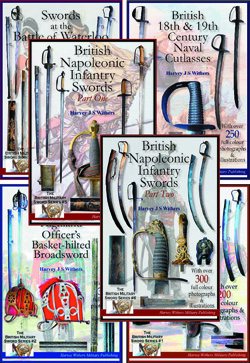